What the hell was that? An alarming sound that was part pig grunt, lion growl and elephant wheeze pierced the air. I lay alone in my tent considering the options. I was either in a whole lot of trouble with some crazy marauding ‘pig-lion-elephant’ or… (I unzipped my tent and poked my head out to breathe a sigh of relief)… it was a koala. For such a gorgeous cuddly looking creature they do make the most awful sound. Wrapped around a limb high on the tree next to me was the offending grey ball of fur. It was the second koala I’d seen on the trail and I was only three hours into it!

The Great Ocean Walk is just over 100km of incredibly diverse and stunning trail sandwiched between the famed Great Ocean Road and the great ocean itself. Over five and a half days I hiked from Apollo Bay west to the Twelve Apostles, every day on the trail bringing some new scenic wonder to dazzle and delight.

From my first camp at Elliot Ridge I walked along wide forest trails through tall gums accompanied by the occasional growl from a koala, eventually leading me to a camp nestled amongst the tea tree at Cape Otway.  As I downed my pack the sky began to darken, and during a post-hike micro-snooze I awoke to a huge gust of wind that felt like someone had grabbed the two corners on the long edge of my tent and given them one almighty loft that literally rolled me over in my bed. Shocked out of my slumber I awoke dazed and confused in the fading light. Too scared to head for the cooking shelter lest my tent blow away, I then cursed and fumbled my way through a challenging session of noodle prep in my tiny vestibule. And so began a long and sleepless night, pushed and shoved in my bed every five minutes by the crazy wind, and blasted by pelting rain, thunder and lightning. I was very impressed (and happy) that my little tent survived the testing conditions.

From the next morning onward though the weather steadily improved and the full glory of the ocean walk was revealed. The sea, now bathed in sun, sparkled a brilliant blue contrasting with red sand cliff top paths dotted with green and silver shrubs. After heading inland to cross the Aire River I hiked back out to the ocean, walking a low path sandwiched between towering red brown cliffs and the sea. Eagles circled above the escarpment on the updraft and I had to keep reminding myself where I was. The scenery was so world class yet completely unfamiliar to me as a stretch of coastline I’d visited a dozen times before just a few hours down the road from home.

The following days brought steep rolling green hills dotted with kangaroos, beach walking on golden sand covered in tiny mauve shells, and a wealth of wildlife including blue wrens, rosellas, black cockatoos, echidnas, and a handful of snakes which slithered peacefully off the path as I passed.

I spent my fourth night at Ryan’s Den, possibly my favourite campsite on the trail, high on a point overlooking the sea.  Its lookout above the trees was the perfect place to observe the evening’s red lunar eclipse. 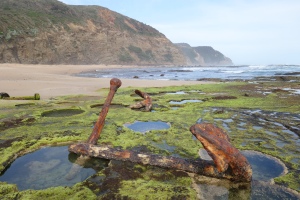 Waiting for low tide the next day, I tackled the beautiful Wreck Beach where the rusted remains of two shipwrecks protrude from rock pools fringed with almost fluorescent green algae. Their iron anchors have now bonded solid with the rock that was their downfall nearly 150 years earlier. Perfectly circular and oval rock pools cut holes in the flat rock ledge like a slab of Swiss cheese, revealing clear and deep water below.

The Devil’s Kitchen, my final camp, was yet another primo location and since I was largely alone on the trail I was free to snaffle the best site yet again. Suite 8 – the last numbered camp with a private picnic seat and sea view.

After hiking past the imposing Point Ronald, the final kilometres of the trail wound their way along the cliff tops with stunning views of the iconic Twelve Apostles, a series of ocean bound sandstone pillars. It all ends at the Gibson Steps, a steep flight of stone steps cut into a smooth and vertical golden sandstone cliff sweeping around in a huge arc that towers over the beach – just one more highlight in an absolutely stunning walk.

I thought I knew this stretch of coastline reasonably well but this hike has shown me a side of the Great Ocean Road that I never knew existed. I feel like I’ve had a backstage pass allowing me a greater understanding and appreciation of this very impressive and diverse region rather than the usual brief glimpses of its attractions from the designated lookout points.

The Great Ocean Walk – Do it! 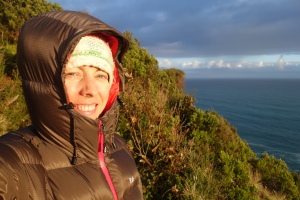